The Truth about 100-year Floods 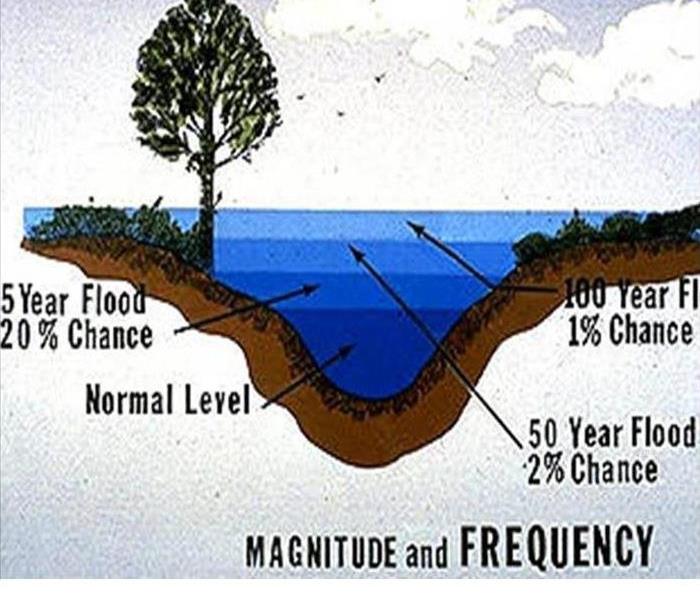 The above image includes a diagram demonstrating the magnitude and frequency of water levels during a flood.

Whenever a strong hurricane or storm causes significant flooding, there is often talk of a 100-year flood.

When people hear this term they think a flood of that magnitude occurs once every hundred years, so they should be safe from harm for the next hundred years. Unfortunately, some base their decision to buy flood insurance on this false belief, putting them at risk of a catastrophic loss.

The reality is much different. It involves frequency analysis and statistical probability. In order to determine the frequency of floods of a given level, scientists create a history of the area. Generally, scientists start with a minimum of 10 years of information. The longer the record the better and the more accurate predictions are. They look at the frequency of different size floods and the average number of years between them to develop the probability of a given size flood in a particular year.

The accumulation of data allows for a determination of the annual probability that a given stream or river will exceed its banks. This is known as annual exceedance probability or AEP. A 1% AEP flood has a 1 in 100 chance of occurring every year, with an average recurrence every 100 years. This is the 100-year flood. A 500-year flood has an AEP of 0.2% chance, or a one in 500 chance, of occurring in any year. It is entirely possible for there to be 100-year or 500-year floods in consecutive years.

Because of the confusion and misunderstanding, the term 100-year flood generates, the U.S. Geological Survey is encouraging the use of the AEP terminology, preferring the phrase “1% AEP flood” over “a 100-year flood.” During the span of a 30-year mortgage, there is a 26% chance of a home in a 1% AEP, or 100-year flood area, of being flooded.